"I dream of soaring among the stars above the dragon world. I dream of diving into the depths of the SeaWing kingdom's ocean. I dream of colors that haven't been discovered yet, of tangible music notes, of finally speaking. I dream of leaving a mark on the world."

Character by Stardust the IceWing-RainWing; coding by AvalonCat with edited colors.

Andromeda is very small for her age, and has a delicate and willowy build. She looks very frail and weak; almost no muscles, but her fragile build makes her a swift flyer. Built like a tiny NightWing, except for IceWing spikes, horns, and tail, her mainscales are a silvery-blue, while her underscales are a pale turquoise. The IceWing horns and spikes running down her back are a dull gray.

Her wings are sort of reverse NightWing wings; their undersides are a gradient from silvery-blue to gray, dotted with shining ebony-colored small scales. Andromeda's eyes are a bright blue streaked with stormy gray; they "stare into your soul." Like her brother, she can give a signature "death stare."

Andromeda's talons are usually stained with chalk dust. Silver glasses sit on her snout and twine up and around her horns. A small green chalkboard with a piece of chalk tied to its top hangs around her neck; she uses it to communicate and writes on it rapidly whenever she needs to "talk." However, the chalkboard is often insufficient for keeping up with rapid conversation, which frustrates Andromeda to no end.

Most of the time, Andromeda wears a neutral expression and an emotionless face. However, look closer and you will find an eternal spark of sadness in the back of her silver eyes.

"So what if I can't talk? That doesn't mean I don't have things to say."

Andromeda is heavily introverted and painfully shy. She is prone to panic attacks when in big crowds, and usually spends her days in a library with her snout in a book. Although she can communicate with others, she doesn't like to do it, and will go to any lengths to avoid other dragonets.

Quiet (duh), reserved, and introspective, Andromeda often spends her time pondering things like the meaning of life. She hates being around other dragons, since she is rather socially awkward (a self-diagnosis) and almost never knows the right thing to say. She is very sensitive and cries when reading a sad scroll.

Andromeda is usually the first to respond to a sudden event. She is extremely self-conscious; she has a photographic memory and remembers every single thing that she's ever seen, heard, or experienced, for better or for worse. She struggles with self-esteem and often finds herself thinking of herself using some not-so-nice words. She is a little neurotic and anxious; sometimes worries about the smallest things.

Fiercely independent and hates admitting weakness, Andromeda usually doesn't bond with other dragons easily. She prefers to fly solo, believing that other dragons cramp her style. She often spends a very long time deciding what to choose, since she balances each and every choice thoroughly, thinking What will be best for me? What could this lead to?

Andromeda is very creative and artistic; playing the violin is her passion. She's extremely smart, and absorbs new knowledge quickly and easily. She absolutely hates being the center of attention, and would choose solitude over socializing any day. She enjoys elegant things, and is uncomfortable around dirtiness - both physically and verbally.

Although Andromeda may seem fragile, she will lash out if provoked. She has two types of bad moods - the one that makes her retreat to her room, and the one that creates snappy remarks and irritated snarks about others. Above everything else, she rejects pity.

"Everything is relative - weaknesses can be strengths in disguise."

"Others think I'm shy when I don't get involved in conversations. But do I look like I care what the latest gossip is?"

Andromeda's mother, Princess Eternity, fell in love with a poor IceWing named Frigid. Since her parents didn't approve, they eloped, and found a small hut in the southern forests of the Ice Kingdom. Over time, their families grudgingly agreed to the marriage, seeing how happy it made their children.

Eventually, Orion and Andromeda were hatched. The two twins grew up happily and peacefully, frolicking in the boreal forests of their home. And when their younger brother Cepheus entered the scene, it only brought more joy to their family.

One day, Andromeda took Cepheus out for a run. He was dragged away by a bear, and was gravely injured right in front of his older sister. Despite her best efforts, Cepheus died in her arms.

After she returned home, Andromeda fell into a crushing depression. She wouldn't eat, wouldn't drink, wouldn't sleep. Her mantra, her endless mantra, repeated over and over in her head: A life for a life. Finally, she fell into a fitful unconscious state.

When she woke up, she woke up with shattered vocal cords. Her mother tearfully informed her that while she was sleeping, she had contracted a deep, rasping cough that had practically murdered her throat. This creative, idealistic dragonet was struck mute, left with no voice to share her ideas with.

Andromeda, despite what she said, never truly adjusted to being mute. It broke her deep inside to know that she would never again speak to her brother, sing terribly with her family, laugh hysterically with her brother.

She was given a chalkboard to communicate with, counseling to help her recover, and eventually, a scholarship to Jade Mountain to unleash "the full force of her academic gifts," her father worded it.

And (not without some tentativeness) off she went to discover friend drama, loads of homework, a charming Night-Silk hybrid, and a new life.

"It is possible to stand within a crowd, but still be alone."

Andromeda sees her father as a kindred soul, since they both have medical disorders and similar personalities. Frigid is always there to cheer up Andromeda with everything he's got, whether it means cracking a joke, telling a story, or making a complete fool out of himself just to make her laugh. Long story short: they love each other.

These twins are exceedingly close. Although Orion is only older by eight seconds, he likes to joke around and call Andromeda his 'baby sister.' They do annoy each other from time to time, but they always make up. They are as different as night and day, but opposites attract, after all.

Andromeda's pudgy little brother was killed by a bear one morning. She considers it her fault, and after he died, she fell into a haze of grief. She stopped eating and drinking, therefore losing the use of her voice. Andromeda loved Cepheus more than anything (besides the rest of her family), and still has not quite forgiven herself for his death.

"Will you just leave me alone?" 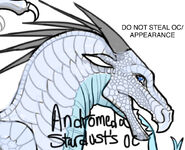 Art would be appreciated ^^

Retrieved from "https://wingsoffirefanon.fandom.com/wiki/Andromeda_(Stardust)?oldid=1622162"
Community content is available under CC-BY-SA unless otherwise noted.