Comicwing, THANK YOU SO MUCH!

A student at SkyWing Academy

Have a good life, become a flying racer dude

flying, food, talking to patients at the hospital, goofing around with friends

"Hi, I am Andean. What happened? Why is a SeaWing here?"

Going to be revamped!!

Andean is a tall, and muscular SkyWing, with honey colored eyes, talons, wing membranes, horns, and wing claw things, and underside. He has bright orange scales, and wears a ruby earring on his right ear. He cares very much about his appearance, and looks in the mirror quite often. He regularly polishes his earring, too.

As I stated before, Andean cares about his look greatly. He is also goofy, and enjoys playing with his friends. He is extroverted, and is the popular kid at school. He loves to come into the hospital and talk with the patients. This shows Andean is also caring. Andean is a ladies man, and girls are always surrounding him. He is a bit of a show-off, he likes to break out his muscles, or fly super fast, especially in front of girls.

Andean hatched peacefully and happily. His mom works as a doctor at the SkyWing hospital, his father is a Lieutenant in the queen's Army, who was recently promoted. His sister, Killdeer, skips most of school to study and work with her mother, to become a doctor. 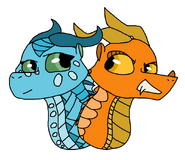 by tailwhisker, the two Andeans!
Add a photo to this gallery
Retrieved from "https://wingsoffirefanon.fandom.com/wiki/Andean_the_SkyWing?oldid=2190258"
Community content is available under CC-BY-SA unless otherwise noted.