Anabatic belongs to Peak! Do not steal, edit, or copy! Ask me if you want to use him in anything! Thank you! 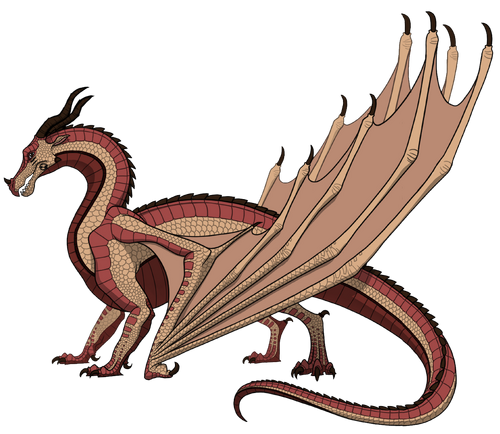 All my life been sittin' at the table
Watchin' them kids, they're living in a fable


"Let's talk about this plan of yours. It's good, except it sucks. So let me do the plan and that way it might be really good." - Star-Lord, Infinity War

Looks, luck, money, and never left a'wishin'
Now it's 'bout time to raise up and petition

Anabatic is an average-sized SkyWing with a color palette that tricks you into thinking he's part MudWing. His snout is a bit shorter than normal and his horns are also a bit odd; instead of curving upward and having a smooth appearance, they slope upwards unexpectedly and are sharp and smooth.

His main scales are a dull copper, never shining or glinting in the sunlight like the SkyWings lucky enough to have copper scales as well. The secondary scales running down his back match his burgundy underbelly and crest. His horns are dark coffee brown with lighter bands circling the wider edges.

Anabatic's eyes make you do a double-take when you look him in the face. Underlined in black charcoal, his eyes glint with two different colors; the right, a bright gold; the left, a powder brown. The minuscule tattoo of the Zero Hopes team rests on the edge of the left side of his jaw; a black arrow surrounded by a hollow circle.

All my life been sittin' at the table
Watchin' them kids, they're living in a fable

Though Anabatic may not be able to control fire and shape it into fancy forms, he definitely beats most of his tribe in their flying skills. He is one of the fastest racers on Pyrrhia; the racetracks he flies are not for rookies or even intermediate racers. Like a hawk, he can tuck one wing in when swerving around an obstacle and keep the other stretched out for the most speed he can get.

He has a large vocabulary of passive swears that no one else uses, phrases that no one has heard of, and slang from where he grew up. Anabatic is also a bit of a girl-magnet, being a famous celebrity and racing icon.

Looks, luck, money, and never left a'wishin'
Now it's 'bout time to stand up and petition

Like most of his team, he is an overly-competitive extroverted racer that lets fame get to his head with ease. His loud, short-tempered extroverted tendencies get him into lots of fights over the smallest of details or the hardest facts. Due to this, he is the best fighter on his team and gets into frequent fights with his rivals.

Anabatic is also an overly-confident dragon, bolstered by his many wins and relatively-untarnished reputation. A constant flirt, he can make any dragon swoon over him with a simple wink and get anyone to hate him in a fraction of a second.

However, he cares for his teammates and family members more than he lets on and wouldn't give them up for the world.

Hatched to the lower class; parent's weren't around much so his older brother, Zeus, became his "parent"; his sister, Feather, was more relaxed than Zeus and joined him on his daily troublemaking adventures; played hookie a lot and flew around the caves and cliffs near Galedart; one day, when he and Feather were about sixteen, they discovered a small, impromptu racing competition at the cliffs and they entered, gambled, and won a lot of money; they brought it home and Zeus was made because they'd gambled and skipped school; they continued to do this for some time until Zeus intervined and broke up the racing competitions with the police; Anabatic was really mad because he'd made a lot of money and was great at flying and loved it; ran away from home about a year later; sent letters to Feather every once and a while; started Zero Hopes at 21 after meeting their rag-tag selves at a dingy competition in the Sand Kingdom

Lightspeed: Positive. Although Lightspeed easily gets on Batic's nerves, he considers him to be almost a son to him. Thinks he should stop flirting with Swiftsun.

Agadir: Positive. Isn't as close to her as he is to the others, he still enjoys her company and is proud of her achievements.

Bateleur: Positive. Enjoys joking around with him and likes that he knows how to talk his way out of a penalty.

Empyrean: Positive. Must be protected at all costs.

Swiftsun: Positive. Doesn't know her too well because she's new to the group but can tell she has potential.

Omnicloud: Positive-neutral. He's found the tribeless dragon very hard to warm up to and still hasn't made up his mind about her. 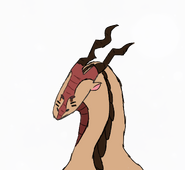 Bust by Raybean! Thank you (he looks amazing)! 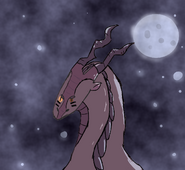 Dark/night bust also by Ray! I love it thank you!
Add a photo to this gallery
I am the machine
Retrieved from "https://wingsoffirefanon.fandom.com/wiki/Anabatic?oldid=2148799"
Community content is available under CC-BY-SA unless otherwise noted.