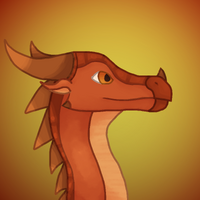 Amber has reddish copper scales with orange chalcedony eyes. She has dark brown markings on her under scales and has a cut on her left arm. She has a red scar on her front leg thigh from her hatching when a part of her eggshell scratched her. She's also fire-resistant because she is a product of two dragons which of one has firescales while the other does not. So instead of having firescales, she is fire-resistant.

Amber is part of the Gold Winglet in Jade Mountain Academy. She's a serious student and hates troublemakers. She also has a humorous side which can be unlocked by few. She also resists falling in love but ends up doing so. She's also a MudWing/SkyWing hybrid as she is Clay and Peril's daughter and hopes she isn't teased for this so she keeps this fact a secret.

Not only this but she has a sarcastic tang about her too. It is possible to annoy her but at times she bites back with her stinging sarcasm.

She is honestly annoyed and bothered by Cliff. She hates the fact he is a trouble maker and refuses to give him the regular respect offered to a prince. This results into him constantly annoying her but she acts sarcastic and teases him sometimes. She doesn't realize he loves her until the dance party. She acts hesitant and more rude than usual to him but throughout the year she finds herself getting more close to him.

Auklet is the youngest SeaWing Princess and is a very ignorant, silly, dainty dragoness. Amber sometimes relies on her and vice versa. They're friends along with Nettle and Cliff. Sometimes Amber can help her when she doesn't understand something but she's sometimes bothered by the princess's ignorance. But the two still make good friends.

Amber is just as bothered at him as she is with Cliff or maybe less. This is probably because he is Cliff's best friend and is very goofy. But Amber seems to consider him a companion as she looks out for him and warns him when his decisions are not good.

She's very close to her mother and chose to stay with her in the Sky Kingdom until she became 4. Then, she parted with her mother to go to school where she could be with her Father. She can touch her mother because she is fire-resistant and hates dragons who refer to Peril as "a monster". Peril also defends her daughter when she gets bullied too.

She joins her father in Jade Mountain Academy, and hopes he will protect her from mean dragons. She stays by him all the time in her first few days before he pushes her to be more social and to make friends. She is fire-resistant just like him.

Amber is an only dragonet. She doesn't care whether she has siblings or not.

Amber was born to Peril and Clay resulting in her being a hybrid. She was born fire-resistant and was a very sky dragonet. Her mother, Peril brought her back to the Sky Kingdom to be raised there. She got teased a little bit for her mother being a firescale and she was even feared a little. Some even expected her to be a firescale herself but she proved them wrong.

When she turned 4, she was sent to Jade Mountain Academy where her father waited. She stayed there and learned as eagerly as she could. She hated distractions that kept her from being focused on schoolwork. Then she met Prince Cliff, Nettle, and Princess Auklet. Cliff had developed a crush on her to which she was unbeknownst to. She dislikes Cliff as he annoys her very much but warms up to him a little.

Later, at an Academy Dance Night, Cliff admits he loves her and dances with her in front of everyone. Embarrased, she runs after they're done dancing and ends up meeting with an accident which results to her being taken to the hospital wing. Cliff stays by her all his time that isn't spent by classes. She is confused why he loves her and stays by her all the time. She constantly tells him to go away and leave her alone but he never does.

After she is released from the hospital, Cliff, as a prince must take part in defeating something that threatened the Sky Kingdom. He asks his friends to come along and, he forces Amber to come with him.

Often, she tries to leave or make a getaway until Cliff catches her and makes her stay. She manages to get away without Cliff noticing her one time. She comes back a week later and Cliff questions her actions. Amber then admits she loves him and figured out she can't be without him.

The two dragons' "romance" is cut off when they have to fight the danger that threatens the SkyWings. They accept each other's love and are officially boyfriend/girl friend after the mission is completed.

Retrieved from "https://wingsoffirefanon.fandom.com/wiki/Amber_the_Skywing?oldid=822254"
Community content is available under CC-BY-SA unless otherwise noted.