Amber belongs to me, AmberOfTheMudWings. No one gets to use.

Amber has shiny, brown scales with golden underscales. She has beautiful amber eyes. Amber is a happy and caring dragon. When she was small her father gave her an amber neckace that she always wears.

Amber's egg was in a group of two, but the other egg never hatched. She was an Un-Sib by birth, so her mother, Hazel, took care of her. Most MudWing parents don't do this, but Hazel had lost all but one of her Sibs in the war, so she knew how Amber would feel with no one to call her a sister. Her father, Terracotta, also took care of her. Her mother taught her to always be kind and her father taught her to always be strong. When Amber was a dragonet of only two years, Terracotta died.

Amber was deeply saddened after this and spent most of her time away from other MudWings, at the Rain forest border. Hazel didn't like young Amber's new 'behavior' and tried to come up with a way to return Amber to being the cheerful, kind dragonet she used to be. There was only one Idea she had faith in; Taking her on a journey through Phyrria.

Terracotta used to promise her to take her on wild adventures and journeys throughout Phyrria, so Hazel believed doing this would remind her of her father, and she would also get to make friends with other species of dragons. Hazel found the place that Amber hid in and told her to pack two or three of her most prized possessions. Amber asked why, and Hazel said that it is now her job to take her on the journeys that her father promised. Amber's eyes brightened at this, and she and her mother flew to their hut to gather their belongings.

After packing, they decided on first traveling to the Rain Kingdom, since they are bordering kingdoms. After a while of hiking through the undergrowth, Amber dashed away. Hazel caught up with her, only to find that she had found a RainWing dragonet. She was collecting fruits in a woven basket, and she was explaining the different types of fruits to Amber. Amber asked what the round, pinkish fruit was, and the RainWing responded by saying that it was her. Both Amber and Hazel were confused until she explained that it was a pomegranate and that her name was Pomegranate.

Soon, Amber and Pomegranate became best friends. They loved doing everything together. One of their favorite things was to mash different fruits and put them together, almost like a smoothie. They experimented with different fruits, but their favorite was a pineapple-strawberry mix. Their favorite for pranking other dragons was a rotten jackfruit-lemon combination, which they first tried out on Hazel. After about a month of geckos, fruits, and rain, Hazel thought it was time to venture somewhere else. After a long goodbye to Pomegranate, they flew off to The Scorpion Den in the Kingdom of Sand.

Some weeks after they left the rain forest, Amber and Hazel were arriving near the sweltering heat of the Scorpion Den. Hundreds of dragons were there, of course, but there were mostly scales of pale yellow. One set of scales, though, stood out from the rest. She wore a lion mane around her neck and beetle shells on her tail. Amber was completely terrified of her, but thinking that, she wondered of that dragon even had friends. Amber and Hazel went up to her, and introduced themselves, and the SandWing introduced herself as Mantykor.

Soon, Amber and Mantykor became good friends, not as close to each other as Amber was with Pomegranate, but still friends. A few days later, they both found out that the leader of the Outclaws, Thorn, has found her long lost daughter, Sunny. That same day, there was a terrible fire and a dangerous viper was reported on the loose near the orphanage. The two were strolling around chatting, when a dragon burst a flame on the canopy not too far from them, and the mane around Mantykor's neck caught aflame.

As fast as she could, she unwrapped the mane from her neck and tossed it on the sand. Amber stomped on the flames until they died out, and they both had a small laugh about it. Then they visited the MudWing doctor nearby, and he reported that she had only minor burns on her neck.

Hazel is Amber's mother, and, like all mother-daughter relationships, they love each other in a way that no one else could.

Amber's father is Terracotta, who was a warrior in the Great War. He died in a small battle at the MudWing-SeaWing border, where he was stabbed by one of Blister's soldiers.

They met on the border of the Mud Kingdom while Pomegranate was fruit gathering.They are now best friends, and love doing everything and anything together.

When Amber saw Mantykor, she was scared, but she decided to make friends with her anyway. They are good friends, not as close as she was with Pomegranate, but still friends.

Feel free to add onto here, and I may edit it a bit 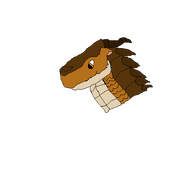 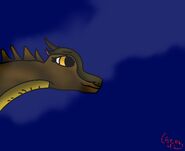 Ooh, the dimensions!
Add a photo to this gallery
Retrieved from "https://wingsoffirefanon.fandom.com/wiki/Amber_Of_The_MudWings?oldid=1372575"
Community content is available under CC-BY-SA unless otherwise noted.