Amazon is a female RainWing attending the Academy. She is a fierce dragonet who wishes to become a warrior.

Amazon’s scales usually take on a light purple colour. Scales on the back are a bit darker purple but still vibrant. The underbelly is pink and a line of yellow scales goes along her body. Round yellow scales form a chain along her long neck and tail, but also appear along arms and legs. The spine spikes are small, close to each other, and dark purple. Her claws and horns are all grey in colour. The curved horns on the back of her head are wrapped partially in lianas as a kind of accessory. The membranes of her wings and frills are magenta, fading to a more reddish pink. Amazon’s eyes are bright lime green.

She wears a green bandana around her neck. Wooden plates are attached to her legs, using lianas to do so.

Amazon differentiates herself from other RainWings in that she is a fighter and someone who actively seeks out risk. Obviously this had made her stand out amongst the primarily pacifistic tribe - especially because the town she lives in is not the biggest and most dragons there are pretty peaceful. She is a troublemaker with a sense for adventure. She gets bored easily and dislikes doing nothing. Patience is a foreign concept to her, and orders are hard to follow when they restrict her. Concentration isn't her thing either, as are plans. She is pretty disorganised, which is more of a RainWing-y thing. Joyfulness and optimism radiate from her. Once determined to do something, she will not stop. She can be pretty dumb, but at least she has her heart at the right place. She will fight for the weak and never use her powers to hurt the innocent. Yes, she is convinced that she has some kind of super special powers. Kinda true, but all RainWings have those.

Amazon and Boa had been friends since like forever. There weren't really a lot of dragonets in their small village, so there wasn't a big friend pool to choose from. Either way, Amazon made the right decision when she befriended the kinda grumpy but well meaning Boa. And while Amazon can be sort of annoying and comes late often Boa still values her friend, her hyperactivity and creativity, which makes it rarely boring to be around her, 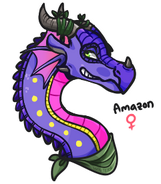 Retrieved from "https://wingsoffirefanon.fandom.com/wiki/Amazon_(Winter314)?oldid=2097759"
Community content is available under CC-BY-SA unless otherwise noted.