Please don't steal this rather bad code, or any aspect of this character.

The amazing Dewdrop the RainWing-MudWing

"I can't remember anything at all"

She was there in a pool of blood

Why are my claws red? - Amaranthine after the death of her mother

Her scales are a grey-brown colour, a unusual colour choice compared to the mostly brightly coloured scales of her tribe. When asked why she didn't choose them to be freely moving between colours as some did, or why they weren't a colour such as yellow, she'd just reply that they remind her of someone. That's the truth, after all.

Her underscales aren't the brightest either, being a greyish white colour. Her eyes are normal though, being the natural bright green of her tribe. Another thing that is bright about her is her talons. While being naturally normal, she painted her talons so their tips are red, like she has blood stains on them. She never answers questions about why she does this, always quickly changing the subject when someone asks.

Her wings are a lighter colour then her main scales, being a reddish grey-brown, and dotted with far apart, white-brown circles. The edges are darker, and the claw tips of her wings have no paint on them.

Her left leg is the one of the more intresting things about her, but not the not beautiful in any way. It works, but it is a mess of scars, burns, scars and even a claw missing. She refuses to discuss this, only say she doesn't want to talk about it. Other scars cover her neck, twisted and burnt not as badly as her leg, but doing much more damage.

She's a thin dragon, and looks as if she was starved at some point in her life. Her scales are taken care of, but not as much as some, as they commonly have dust and dirt on them. She wears no jewellery, not even the smallest earring. She does wear a black cloak to hide her neck though, and glasses. </div>

Her body cold and still

What do you mean I'm a monster? What did I do? - Amaranthine

Always a rather awkward and shy dragon, thouhh seemingly unable to top talking if she gets started. Passionate about the things she loves, often gesturing wildly as she speaks. She's gradually learning to open up again.

The death of her mother, made worse by the fact that she was the cause, had a extreme negative impact on her. She closed up, and struggled with self-esteem issues among other things. However she's getting the help she needs, and is trying to work through it. She's also trying to improve the relationship she has with her adopted family and at school, though she's having trouble, partly from all the rumours about her past.

A stubborn drsgon, not easily persuaded to change unless she's willing. She hates hates anythping wrong or not completely perfect. Doesn't give up easily, with the exception of if she realises she's fighting a battle that's already lost. She hates her knowledge about something being incomplete, with a hatred of puzzles she can't solve. Horrible at riddles, which annoys her endlessly. She's quite studious, throwing herself into class work. A bit of a bookworm, mostly non-fiction.

She still misses the rainforest, and harbours a grudge against SkyWings, blaming them even though she's fully aware it is irrational. She hates anything illogical for the most part, and is more likely to believe facts then stories. Amaranthine refuses to believe anything without proof. She can sometimes be stupidly reckless in pursuit of the proof, this recklessness being one of the only illogical thing she tolerates. Anything to do with emotions is the other.

She gets angry easily, but rarely expresses it. She finds it better to just let whatever is angering her go away, or comes to terms with it quietly. She isn't really a forgive and forget kind of person, holding grudges even after someone apologies.

Not a dragon likely to joke around or be silly, as she's a serious type. Amaranthine would much rather read a scroll then go to a party.

And when I looked up

Amaranthine's parents died before she was born, and Cinerea adopted her soon after. Amaranthine was never really bothered by the death of her first parents, regarding Cinerea as her only mother. She was loved and cared for, along with Ataraxia, Cinerea's daughter. They grew up together, and had a peaceful childhood. They lived in the Rain Kingdom in those happy days, playing under the trees and in the mud Ataraxia loved so much. She was never bothered much by being adopted, or that she lived with MudWings, and shook of the taunts, which didn't last long anyway. Amaranthine suspected Ataraxia had talked with them about it.

Then Cinerea announced the move to the Sky Kingdom. Amaranthine reacted badly, starting up an argument. She was young, with bad control over her venom. There was an accident, and by the end of it Cinera was dead.

Atraraxia and Amaranthine broke apart. There was some more yelling, and Amaranthibe was kicked out of their shared house.

So she ran, to Hosanna, where she lived, going to therapy. She receives news of her sister every now and then, but they avoid each other, blames and lies separating them. She goes to the nearby school, Semi-happily, and is on the road to mental recovery.

"Murderer!" - A normal interaction between Ataraxia and Amaranthine

The two sisters were once inseparable, Amaranthine coming to Ataraxia for help and comfort and Ataraxia serving as a calming presence, and coming to Amaranthine to lighten up. Ataraxia was very protective of her younger sister, and was the one who tended to her injuries. But after their mother's death, which Ataraxia blamed Amaranthine for, they fell apart. They maintain communicatigon, but they stay apart. The sister still fight whenever they meet in person, and neither is willing to admit defeat.

She used to be my shoulder to cry on, I used to be the only one who could make her laugh... now, we hate each other, or we think we do, really we just miss each other, though we'd never admit it - Amaranthine

Mother! What have I done! Mother! - Amaranthine after her mother's death

Cinerea was always there for Amarathine, but she always favoured her real daughter, no matter how much she tried not to. Cinerea was always there though someone to watch and learn from for a young dragonet, just as much as Ataraxia was. Until that fateful argument, when in a fit of anger Amaranthine killed her with one sharp blow to the head. Amaranthine would never forgive herself for that, for she loved her mother, and Cinerea had only let he preference for Ataraxia go so far.

I'm sorry mother, and I wish Ataraxia would believe that, oh I'm sorry, I hope you would forgive me - Amaranthine at Cinerea's grave.

Ask in the comments if you want to be added.

Hosanna: She is beginning to trust and even like the MudWing, regarding her as a bit of a third mother, but doesn't trust her enough to tell her about her past. She finds Hosanna’s obsession with bubble tea a bit weird, but doesn't mind as long as she can have her normal, herbal teas. She's still a bit guarded around her though, but she'll melt eventually.

Adoptive Brothers and Sisters: She is aware of the many rumours surrounding her, none of them good. She keeps to herself and most of them stay away from her. Lately she's been trying to befriend them with little success.

"But I got no answer, I got no reply

Venom: While, like all RainWings, she refuses to use her venom as a weapon most of the time, if it's between her and another dragon, she can shoot venom with skill. She's worked on this skill obsessively.

Intelligence: Amaranthine, as mentioned in her personality, is a highly intelligent dragon who is mainly logic based.

Swimmer: She can swim, though no where near as well as SeaWings or SeaWing hybrids, and not very well.

Knowledge: While not exceptionally smart, she reads a lot, and has large amounts of knowledge stored away.

And now I'm filled with demons, and I can only say.

Crying: Not exactly a weakness, but regarded as one, something went wrong with her eyes, leaving her unable to cry.

Leg: She walks with a limp, because her right foreleg is scarred and hurts slightly to use.

Mental Health: In need of therapy. 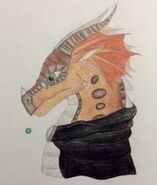 Amaranthine headshot by the making DragonflyWarrior! Thank you so much!

Full body by DragonflyWarrior! Thank you so much!
Add a photo to this gallery
Retrieved from "https://wingsoffirefanon.fandom.com/wiki/Amaranthine_(Skyfire)?oldid=1255914"
Community content is available under CC-BY-SA unless otherwise noted.