Appearance -A ripe Apricot orange stains Alfalfa's tiny flimsy scales, like a brittle shell. His snout is long with a soft broadened edge to the tip of it. The top of his nostrils are a mellow marigold and make two long streaks on the top of his snout. The same color can be found on his antenna and on the back scaling of his rather scrawny arms and legs. His underbelly is a bright but pale pastel yellow flowing down his underbelly, the same color as the floof found on his antenna. Overlapping scales make large lines of dark turquoise behind his throat and go down his back to the tip of his tail. His talons are a vibrant orange-yellow and the spines on his back are the same Apricot as his body, maybe a little lighter in fact. his wings shine like a honey gold film and are beautiful in the light. More long turquoise stripes can be found on the wings and slightly gradient to peach at the tips, like a dulled photo left in the sun.

He has grassy eyes and a silver worker band on his left arm.

Personality Alfalfa is a simple dragon. He likes the sun, art and has been taught to treat every dragon with respect. Childish but somber his demeanor clashes with his color. You'd expect a rambunctious jaunty dragon with his bright stripes and summer wings. But, no. He quite likes his quite life... For the most part.

The daily grind is what keeps Alfalfa's mind in the present. Without it what other reason would he have to stay in the hives... Not really too many. His Father and Mother never truly understood Alfalfa ever since he was born and he has lost connections with them. His siblings were shipped off after their own 5th birthdays and he has lost connections with them as well.

The farthest thing from vengeful he is passive to cruel and rude dragons especially HiveWings though he tries to avoid them as much as he can.

History Life wears on like an old wheel turning and turning till it finally pops like a balloon. 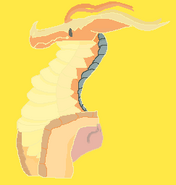 By My dude Verglas TYP!! 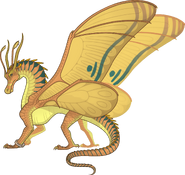 By me. (Pls use when drawing) 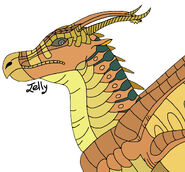 April fools was one month ago... 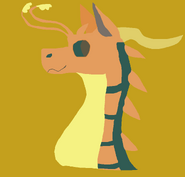 Another one by my dude Verglas! TY!!
Add a photo to this gallery

Retrieved from "https://wingsoffirefanon.fandom.com/wiki/Alfalfa?oldid=2077186"
Community content is available under CC-BY-SA unless otherwise noted.