Live life and protect those around him

Threats to others, killing, death, forced contact with fire, cages

Able to mold most metals with sharp claws, very unstable ability to ignite

Mountain Fury - Was the first dragon the Aiden has met since the night that Serena and his family were killed. He trusts her completely and feels that they shared a similar early life controlled by both Scarlet and Ruby. Aiden has promised himself to protect Fury and feels that she deserves the best life possible. Over the course of their adventures, Aiden has developed feelings for Fury and will do whatever is neccassary to make her happy with her life. They are now boyfriend and girlfriend.

Frost Fire - The second dragon that Aiden has ever met. Aiden was fast to befriend Frost Fire and trusts him. He knows little about Frost Fire and his origins, but feels that they share a mutual dislike of most SkyWings.

Ardens Stella -  Aiden is unsure, fearful, and somewhat curious of Arden, but feels that since he has a strong relationship with Frost Fire, that he can trust the RainWing.

ShadowEye- Aiden feels that he can trusts ShadowEye with anything. This is Aiden's best friend other than Fury, and Aiden would do nothing to betray his trust.  Aiden understands NightWings better than he does any other dragon type. 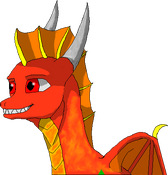 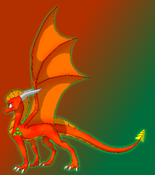 Pretty amazing :D This was traced with permission from http://fourth-star.deviantart.com 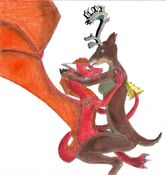 Made by Blizzard of the ice wing
Add a photo to this gallery
Retrieved from "https://wingsoffirefanon.fandom.com/wiki/Aiden?oldid=2082584"
Community content is available under CC-BY-SA unless otherwise noted.