This is a character that belongs to Verglas, please don't use him without permission first, thank you

Coding is by the amazing Essence!

Such a lovely being, a pleasant surprise in this world a dragon trapped forever underground with the rest of his kind, purebreds, what a rare occurrence in this harsh world. A weary built being, Aesthetic is his name, there's not much out there to say about him other than the fact one may always notice his stunning appearance, pale sea green scales rippling across a surprisingly small body. Bleak, black eyes and a expression of self-conscious upon his short snout. In following that,,, two droplets off the chin, both remaining white, tipped with gold, not lustrous but enough to catch one's attention for a bit.

It can be stated fact, the sail remains the most noticeable part of the dragon, an ocean blue,,, the size rather intimidating, ridged membranes fading from the base into ocean greens of all hues. Short neck, curved and goose-like and upon the gills, salmon red band the outlines of each. Ears remain small and gently curved, the insides a soft, pastel pink,,, with that, should there be a shimmering underbelly, like glassy oceans, it's a seahorse blue. Rippling, shimmering and incredibly smooth like polished agates, and softly rippling horns, a white cream, curving in a short upward arc before curving at the tips.

Luminous stripes,,, something lacking upon the body, rather only appearing upon his face as yellowing markings as though old parchment, behind the eyes and over top,,, rather small in size. There is, too mention upon each gill a small, luminous dot and with that, only upon neck and face shall you see glowing or flashing ever so slightly. A short, wiry body fits upon him and with that, large wings the colors of the ocean, fading into one another,,, similar to that of the sail, flopping to one side ever so slightly.

With masterful smug looks and mischief flickering within the SeaWing's eyes, he is but someone you can't put any trust into. Gently painted upon his horns, black markings that are rather swirling in pattern, like roses blooming, they branch out here and there. Following through, a thick tail that is, surprisingly, quite flexible in terms of maneuvers, while not enough to be considerably prehensile, it's enough to be a form of attack and arts of tripping.

Short, black talons upon long legs, following a wiry, stocky and rather bendy build, a wavy, finely curved back, short neck and stubbly snout, Aesthetic is considerably flexible in some ways than in others. His back arches up and when he walks, his back sometimes goes up and down like that of an ocean wave and a usual peaceful expression crosses his face. With this, he carries the smell of underground water, stone and the faint mist of the ocean.

Who would've thought this being carried one of the most powerful magics in the lands,,, one of the gifted beings of the Underearth, yet his magics remain unknown to all,,, except for that of himself. The webbing, to mention, remains crystal blue with tinges of light indigo and sky blue, this isn't considerably interesting, saying that he lives in a place of darkness. One last thing to consider when upon spotting him,,, the two rather large black earrings hanging from his right ear, rather glossy and lustrous in the dim lighting.

This is but the most description that can be provided, for there's not much else to be said, perhaps his scales of fading slightly in color, being away from the sunlight for almost all his 15 years. For that reason he hardly remembers what sunlight feels like, growing used to the coldness of water,,, his scales are always seemingly damp with water. And it's stank,,, he carries everywhere.

You can get the gist of this character upon meeting him for the first time, a smug, sarcastic being who simply takes pleasure in others frustrations and annoyances. It's in his voice whenever he speaks, it's in his stride, it's everywhere on him, those two words. Following sarcasm, deep within is quiet rebellion. The need to take the king off power, a need to take what isn't rightfully his. This boils down to Aesthetic's reckless behavior, coming to not watching his tongue upon speaking and the fact he speaks from his mind, not from his heart. He's not exactly one of those characters in whom can be controlled easily by anyone, not the king, not highly respected beings, possibly not even the gods themselves.

Going talon and talon with his reckless behavior, the SeaWing was always prone to not looking before he leaps and jumping headfirst into things. He has the certain self-confidence and behavior that doesn't care about the possible consequences. In some cases, he'd even find himself invincible, which ultimately leads to him getting hurt or tripping over certain things and falling into deep pits. Aesthetic, at first glance, isn't necessarily the best character to meet, for he doesn't take a side for good or for evil, he's simply neutral. With that, he's not exactly that likable or popular in the case of the purebreds in the Underearth, being a lone rebel. He is but the last dragon you'd want to get advice from, the SeaWing has a tendency to bend the truth and has a specialty in handing out bad advice.

Yet no one would expect him to be one of the only animi in the Underearth. That brings up questions, why hasn't he used these powers to destroy the king? Or used them to make everyone love him? That is what has a simple answer to it. He's scared, fearing that if he explained to anyone his powers that they'd take him prisoner and somehow take his powers away. Or worse, use him for something he doesn't want to be used for. While he may not appear good-hearted on the outside, deep inside, he's insecure, horrified of what his powers can truly do to the world around him. One may expect him to kill or harm others, but in truth, Aesthetic finds everyone else just as much as a prisoner as he is and he'd never stupt to murder, sure maybe giving someone a scar or two, but never miaming or killing from him. Although it may come off as a nice threat once in awhile.

The animus magic that he holds in his talons causes him self-doubt and uncertainty. It may come to a bit of a shock to hear he wishes he was never an animus, despite how much power it can bestow. He deeply fears going insane due to this magic and having said that, never used his powers unless completely necessary. Then again, that often brings him some hesitance. Like any of the purebreds of the Underearth, Aesthetic has an old hatred for hybrids, for they were the ones who locked them all down in the depths of Pyrrhia forever. One can see it in him, especially so in his perked ears that the SeaWing stays vigilant and for that, it's impossible to sneak up on him. There are some sides in which Aesthetic can come off as nosy and / or childish, even then he still holds a rebellious nature.

While he may not be considerably good, he isn't by any means that evil, rather the SeaWing is more or less insecure of what his animus powers are capable of. He doesn't trust magic. No one would if magic was the cause for being trapped underground forever. That had caused him to have a great dislike towards hybrids, but who would if they were the cause behind all purebreds being trapped here in the first place. It's a reason why he greatly dislikes intermingling with other tribes and because of that, he only sticks to befriending SeaWings, it's only fair. Now then, you could better understand what this dragonet is going through, fear and hidden rebellion.

Aesthetic doesn't differ far from any other SeaWing purebred, it's quite obvious that his abilities fail to be unique compared to the rest. Like any other being from his tribe, he has a capability to breathe underwater for as long as he wishes, this is, of course, due to the gills on the sides of his neck.

for relationships, I take preference to roleplaying beforehand

ha, ha. the prince sucks. Perhaps it's just his hatred for most things having to do with royalty, but Toto in particular 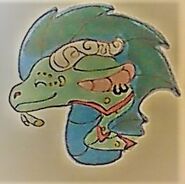 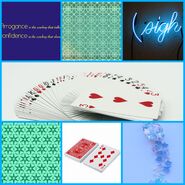 sbyman
Add a photo to this gallery
Retrieved from "https://wingsoffirefanon.fandom.com/wiki/Aesthetic?oldid=2177071"
Community content is available under CC-BY-SA unless otherwise noted.