Troll (If that counts)

Deeper, Darker side of me by The Veer Union

Belongs to Nightslayer, DO NOT EDIT OR I WILL END YOU.

Here: Have some information

In his true form, Aera has red skin and maroon markings on his snout. He wears a gold ear accessory on both of his ears. He also has deep red wing membranes. He wears a Beaver-Skin vest.

Aera was adopted by Stricklander, a Changling just like him. He was trained to transform into a SkyWing and act like one. But, this training did not last long. The normal TrollWings found out that Aera was a Changling, and, without regret, challenged him to fight another TrollWing who was bigger and stronger than him. Aera was defeated and sent out of the Market Place he called home. He traveled with his adopted father to the Mud Kingdom to become mates once more with Willow. Willow seems to know about Aera's true form, but doesn't let her son, Swamp, know about it. Swamp and Aera didn't get along very much because Swamp thought Aera was going to cause destruction to the world, but Aera is not like that. They will often fight, and sometimes actually fight (like claws, teeth, you get the drill). Aera goes to Swamp's school, disguised as a SkyWing named Flare, which does not help with Swamp's affection to him. They still got into fights and one day it got pretty bad. Swamp snapped and swung at Flame, causing a huge fight. Luckly, Stricklander, known as Terrorhight the NightWing in his form, split up the fight and gave them both detention. They later on soon realized they didn't HAVE to hate each other, and they got along ever since. BUT, he is still a Changling, and Swamp has to watch his back whenever Aera is out and about. Once, Aera stole some rings from a jewelry store because he thought they were pretty and still has them to this day. Then, he stole some comics, but he got caught and had to return them. More coming soon...

Aera is a HUGE flirt. He flirts with the first girl he likes, and sometimes girl TrollWings. He is very nice and tends to get angered easily, like a SkyWing. He is a bit of a troublemaker and gets in trouble everyday in school, but not in his father's class. He sometimes does graffiti on bridges, houses, walls, and even his school, hitting he like graffiti. He is also a wild party animal! He has a bunch of TrollWings party at his house on the weekends without his adopted family knowing it, but soon they'll find out.

Father: He's a cool guy! I just want to be like him someday...

Mother: Other than when she calls me "Thief Boy", I still love her.

Swamp: We used to HATE each other, like, really bad. We're cool now. 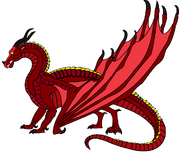 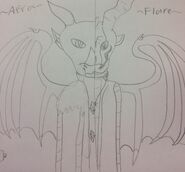 Drawn by Nightslayer on paper and pencil 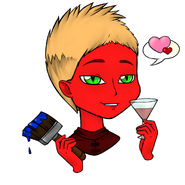 Human form of Aera by MKDragonet!
Add a photo to this gallery

</span>
Retrieved from "https://wingsoffirefanon.fandom.com/wiki/Aera?oldid=736341"
Community content is available under CC-BY-SA unless otherwise noted.