Start a Wiki
image used in the coding is free-to-use, but credit to andreas dress (photographer)

this character was made by wings-of-bloodfire. coding + oc are not free-to-use.

this character is listed as mature content. read at your own discretion.
tw// verbal abuse, depression, unhealthy ways of coping, "justified" murder

A d r e n a l i n e
Adrenaline always had a strong urge to fight, even since he was a dragonet. His father was full of rage and impatience, able to snap at the smallest thing; perhaps this rubbed off on his impressionable son. To help control his rage, he joined the SkyWing military. However, Adrenaline's help was soon enlisted by an old friend, who was working on making weapons for the SkyWing army: a projectile using exploding power. This gun-like weapon helped him gain some control back in his life, taking to the streets at night to rid Pyrrhia of criminals and malevolent dragons, where he became known as the vigilante "The Gun Gale."

Adrenaline is a large, daunting SkyWing, standing tall above many dragons, and carrying himself proudly. He has a barrel-like chest, with lean muscle and aerodynamic features in his narrow head and sharp angles. His wings are huge in order to support his size, not to mention his genetics as a SkyWing, and he has a long tail to counter his flying and keep his balance.

His scales are a muted orange, with red topscales. His horns are long, straight, and a stonewash gray with a blue tint in the light. His eyes burn with a blue fire, with cyan marks under them of an unknown origin (so he claims. He definitely tattooed them on his face when he was in the military). His underscales are the color of soft sand while his wing undersides are dark red, similar to that of wine.

The SkyWing, under the infamous title "The Gun Gale", is known for his mastery in projectile weapons, of which "guns" have just been recently invented. He always wears a flattened bulletproof vest under his guise, for precautionary reasons. He is seen in a black leather-like, long sleeved top with a hood. The hood is always up, and he wears a white bandana or scarf around his snout to conceal his identity. He wears black pants with white foot wrappings. He has white wrappings around his talons.

His sniper is slung across his back, and he carries ammo around his tail. A small handgun is hidden among his leather.

-- angry at the World

-- tries to use said anger for something he decrees as "good"

-- means well, just the wrong way about it

Fire
Adrenaline has the ability to breathe fire. He doesn't use it very much, calling it "an easy way out". Embers will occasionally spark out of his mouth, but he hasn't actually breathed fire in a long time.

Agility
He is a very agile and quick dragon. He is quite skilled in the air as well.

Adrenaline's story does not start out happy. Ironically, he was born in a poor suburb of Redheart City, the SkyWing city of wealth and industrialization, technology and inventions way before its time. There were three dragonets in the clutch: Adrenaline, his brother Downwind, and his sister Harvest. Their parents fought all the time, their father turning up back in their shambled den after being missing for a couple days. This cycle would repeat frequently, but Adrenaline's mother refused to leave her mate because she wasn't sure she could support her dragonets without him.

Their mother fell more and more into depression as the years trudged by. The dragonets were nearly 15 (human) years old when their father got so angry he raked his claws across his mate's delicate face. Not a split second later, Adrenaline and Downwind leapt in front of their mother while their sister slipped behind them to tend to their mother, who was in shock. Together, the brothers drove their horrid father out the den. With their father out of the picture, life began to look up for them.

With all of her dragonets (who now had turned 18 years old and were considered "dragons" in the eyes of society) working, the family was able to move out of the shabby den in the poor suburb and move to a different suburb of Redheart City, one with better living conditions. His mother was a new target for lustful remarks at her seamstress job, something that resonated deep within her sons. The two appeared at the initiator's den and, while masked, proceeded to threaten him until he promised to never target another dragonness again. This was the beginning of Adrenaline's violent streak that consumed him.

The next event that fueled his streak was when his sister was married off to a rich dragon in hope it would raise the family some money. The wealthy lord SkyWing was arrogant and prideful, who had fallen madly in love with her pretty looks and docile attitude. He tried to swoon her, to get her approval for their marriage, but she refused. He then turned to their mother, who was clearly still struggling to get by. He promised to give her lots of money if he married her daughter, and although everyone in the family did not want to hand Harvest over to this snotty lord, their mother reluctantly agreed.

The family never saw Harvest again, and in return did not get the money he promised them. As their mother had a breakdown about what she'd done, Adrenaline and Downwind were plotting another scheme like the one with the coworker, but she seemed to read their thoughts and told them to not look for trouble.

Instead, Downwind and Adrenaline enrolled in the SkyWing military at 20 years old in order to release their anger in a way that was legal. They would patrol the perimeter of the SkyWing territory and make sure there were no border disputes and issues with the surrounding tribes.

-- meanwhile, a friend of Addie's from the military, who dropped out to work on inventing weapons of war, helps invent a projectile weapon using exploding powder....the first gun

-- enlists Addie to test it out for him

-- my boy really loves it. its like. so easy and a lot less messy??

-- but you know its still early testing so it's not super great at first. kinda loud when it goes off, lots of smoke, strong backjolt force on the user

-- friend lets him keep it and tries to improve upon the guns, letting addie try out each one, but none of them are that great yet

-- however, Addie gets Really Good at them and since guns havent been released to the general public or even most of the soldiers yet, he has Big Advantage

-- decides to try his hand at being a soldier by day, mercenary and vigilante at night to rid Pyrrhia of the Bad Apples

-- really enjoys it. makes him feel good about himself, like he's ridding pyrrhia of evil and making it a better place

-- eventually quits being a skywing soldier since they get into wars a lot over dumb things and are rlly tempermental. becomes his side business as a vigilante / mercenary full time babey. but pretty much only does this at night and sleeps during the day. gotta get that sleep somehow 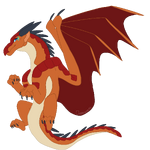 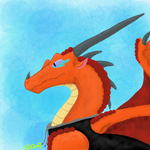 cloud the icewing
Retrieved from "https://wingsoffirefanon.fandom.com/wiki/Adrenaline?oldid=2422895"
Community content is available under CC-BY-SA unless otherwise noted.