Up for adoption; I have been unable to take care of this smol bean well enough, as ive been really really busy with other OCs. Take care of him well.

Sometimes it's better to be alone, no one can hurt you that way 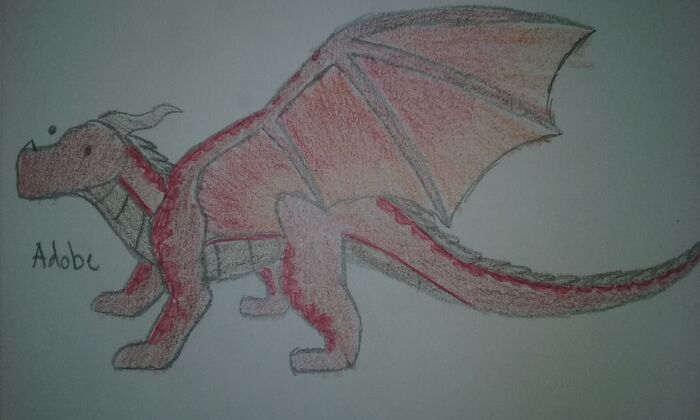 Lonely does not always mean alone

Adobe is a poor SkyWing/MudWing whose parents died in the War of SandWing Succession. He lives on the move, never really settling in one place.

Ideas for appearance and some abilities by Aryafire1

Pray for Me by Kendrick Lamar

Find someone willing to care for him

The many animals he meets, the friends he makes, his courage

Anyone who tries to hurt/stop him

When he had parents, food, shelter, dragons who care for him

The cruel reality of his life, getting hurt

His fire, his claws, and his teeth

I fight the world, I fight you, I fight myself

"Living off the land is tough, and you gotta be tough to make it through it" -Wisdomsharer to Adobe

Adobe has rusty red scales, though they do have a bright red emphasis. He has typical SkyWing wings, large, and his eyes are an amber-orange colour.

I fight God, just tell me how many burdens left

"I can't give up now" -Adobe to himself

Adobe at first was a scared, lonely dragon. He would have never survived his now cruel life if he hadn't become clever and tough. He hates to kill, and only kills for food. Only ever for food.

He fights his way to survival, but sometimes the road gets hard. He knows it too, and sometimes breaks down crying. Sometimes.

I fight pain, and hurricanes, today I wept

"There's gotta be a way to make this work" -Adobe's thoughts

Unlike most dragons on his mom's side, he does not need to be warm to breath fire, and he has quite strong fire.

Adobe is clever enough to always find a way around every difficult situation. Well, almost every situation. But he has always found ways to have food, water and shelter when others would have no clue what to do

Adobe is really sensitive and finds it hard to hurt anyone or anything, even for food. In the forest, where the rule is kill or be killed, this is a dangerous weakness.

Trying to fight back tears, flood on my doorstep

Adobe was hatched to a MudWing mother and SkyWing father. They raised him happily in the Mud Kingdom during the War of SandWing Succession, and even though his mother was a MudWing, she cared about him. She stayed with him and his father.

He didn't have a sib group, but he loved his parents enough. But then one day, when Adobe was age four, tragedy struck. Adobe's mother and father died in battle.

Adobe was treated as an outcast, as he had no sibs. Eventually, he just left, and began his life as a orphaned traveler.

At first, he was scared at every single sound he heard. Every rustle could be an enemy. Every bird call could be a terrifying flyer bent on killing him.

But eventually he found a small village, and the dragons there were kind. The villagers helped him become stronger and less afraid. He loved this village, but he soon had to leave. It was a sad goodbye, especially to the village leader, an escaped NightWing named Wisdomsharer. Wisdomsharer had taught him skills to survive and be strong in the wilderness.

He went back into the forest and slept there a few nights until he found a small civilization. This place was riddled with disease and poverty, but there he met a dragon around his age that still had hope for the future. Her name was Bean.

Life a living hell, puddles of blood in the streets. Shooters on the rooftop, government aid ain't relief

Mostly, Adobe inherited genes from his father. He looks SkyWing and he doesn't need to be warm to breathe fire.

"I don't wanna leave, but I have to" -Adobe to a friend he made

Adobe really looks up to this wise NightWing village leader, and pays lots of attention to him. He was very sad to leave him and still misses him. He thinks of him as a mentor, even as, to him, it seemed then, a temporary father.

The poor run with smoke lungs and Scarface

Who need a hero? You need a hero, look in the mirror, there go your hero 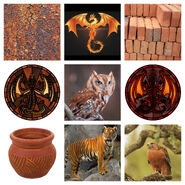 Aethetic by Quickdragon
Add a photo to this gallery

Who on the frontlines at ground zero? My heart don't skip a beat even when hard times bust the needle

Mass destruction and mass corruption, their souls are suffering men. Clutching on deaf ears again, rapture is coming. It's all prophecy and if I gotta be sacrificed for the greater good then that's what it's gotta be

Who won't pray for me

Retrieved from "https://wingsoffirefanon.fandom.com/wiki/Adobe%7E?oldid=1799692"
Community content is available under CC-BY-SA unless otherwise noted.