By Hey and CelstialCelestial Do not mess with her, but grammar edits are fine... Ref by Hey. Code from Free Formats. 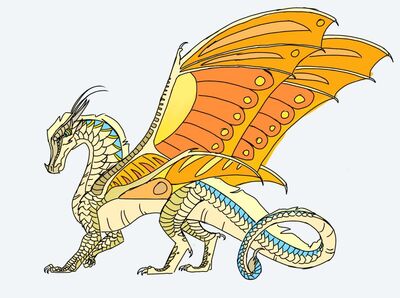 Adelpha is a SilkWing/SandWing, and she hates to be reminded of that. Her cream mainscales and sail are a light cream, lined with blue. Her underbelly is a faintly darker shade. Her crimson-orange wings are patterned with yellow, and a golden-orange. She has the Sandwing barb, and SilkWing antennae and wings. This pairs well with her petite height and unassuming figure. Walking with a slight limp, and an awkward grace, Adelpha doesn't seem like much, and she likes it that way. Her posture is normally slightly cautious, but if she is comfortable around the dragons she is with, she will stand up straight and relaxed. Something in her eyes is constantly wary, though. Adelpha seems to threaten others who remind her of her mish-mash appearance with death, however, most of the threats don't seem very convincing.

(She can fold her wings in)

Adelpha is very quiet, and she tries not to draw too much attention to herself, which usually works. Since she tries not to attract anybody's eye, it makes her extremely awkward around other dragons, though she will be more arrogant and headstrong around Opaki. She finds it difficult to try and talk about what had happened to her during her time on Pantala, especially the fire in the jungle. She is almost constantly mumbling, maybe from her slightly more... traumatic escape. Adelpha sits in the back of the classroom, quietly noticing dragons' body language, which tail twitch signals what emotion, If not that, Adelpha is reading. The dragonet spends her lunches in the library, reading and undisturbed. Some of the notes on her books are extremely harsh, although they make sense... This quiet demeanour around dragons, and aggressive critic behaviour around books, might be due to a new life in Pyrrhia, or maybe a life spent under Wasp. However, if Wasp never had existed, perhaps Adelpha would be the clever, confident, bold dragon she wishes she was... She has a longing to really meet her father, Mariposa, because then maybe her family would be more whole and happy. Which is something she would (quite literally) kill for. Her friends and brother hope she never meets an animus, due to her slightly crazed behavior.

(note: you are welcome to make a page for her or addax so i can add a link!)

Eight years before Adelpha was born...

"Addax, I'm sorry. But we can't stay here in the SeaWing kingdom, it's too dangerous." Two young dragons stand together, alone in a section of the Summer Palace. "I know, Seal, but can we at least wait a little bit... please?" The SeaWing, Seal, thinks for a while. At last... "I enchant this stone to take Addax and I far.. far... away...." Addax woke up in a strange land. Grey-ish brown trees dot the horizon, and animals with exquisitely long necks wander the plains. A jungle stands, far distant, poisonously green. She suddenly jumps up, realizing Seal was gone... she cries until the sun sets crimson over the horizon, red as blood. Finally, she makes a move towards the jungle. As the first rays of blue-gold paint the horizon, she is swept into comforting arms... Addax sees red-gold wings, four of them?, dotted with the same blue as the early sky.

Adelpha hops out of bed. She's survived four years, (despite that bully, Pieridae) and has no doubt she’ll be old and grey by the time she dies. Living in Jewel hive, at least the HiveWings were to preoccupied with their jewelry to be mean to her. She expects nothing other than a normal day to happen, no more flashes of green and sandy yellow, like she saw in that dream. Still hazy from sleep, on her way to school she bumps into one of her friends, Admiral... she's not popular but she gets by. "Umph... I dreamed of green and gold yesterday," she mumbles... "It was kinda pretty, actually." Her tired mumblings continue... until the explosions start. HiveWings and SilkWings alike run screaming through the streets Boom! One after another, her world shakes... and a cream dragon... two wings? steps through the jagged opening in the wall, newly formed. "Adelpha, It's time to come home... but first, why don't you come with me and rest... and meet your father...

Six years before Adelpha is born...

Addax wakes up in the SilkWing camp... a mix of rebellious SilkWings and HiveWings gather around a encased fire. "This is Mariposa," a young blue and brown SilkWing announces, "You're lucky he found you, not Wasp" Addax waves shyly at a young dragon, red and blue, before lapsing into sleep again... "Wake up!" "Ughh," she moans, " M-M...Mariposa? That's your name, right?" Mariposa nods kindly walks over, and then lifts her onto her feet, calmly brushing shoulders... "Addax, right? Nice to meet you, don't mind Swallowtail over there, he's always grumpy... has anyone told you how pretty you are, oh strange dragon?"

Addax blushes and mumbles to herself...

Adelpha numbly follows her mother through the trees. "We used dragon flame cacti... Made a quick stop at Wasp hive... pretty sure she's scared of my fire... also hybrids because they pose a threat to her authority... something along those lines... and they look weird and are mostly SilkWings, rescued some other hybrids that are staying in the camp now... in case you end up in my line of work, which is an elite assassin. No, actually, wait. I don't recommend that." Adelpha, too sleepy and stunned to keep up with this anxiety-in-disguise line of thought, follows numbly. "We'll start over the Ocean in a few days, okay..." Adelpha collapses at the edge of the jungle, just like her mother did many years ago.

"Here, just outside the entrance... this is the fairest Hive, see, we'll come back for her someday, I love her too... Addax... Addax, are you okay?

Adelpha mumbles, (she seems to do a lot of that) Addax and Mariposa stand over her... "Are you sure she'll adjust, she's never met you, Mariposa."

Adelpha somehow subconsciously comprehends this, and sits up, looking through the trees... and sees fire, but Addax reacts first, following her gaze. "Some of the forest, Mariposa! It's burning... and... seriously? Wasp?"

The camp is chaos. Dragons flee everywhere, most getting stabbed by a spear or talon. HiveWings, eyes blank, surround the captured and dead. Adelpha has a dim memory of running... and getting dragged... and flying... And then And.. and... and. A HiveWing, fully armored, royal looking, rises into the air.

"I... will... kill you... for this" And then Wasp crashes into the ground, tail scorched, howling in pain, her tail stinger barely grazing Adelpha's leg. Adelpha and Addax fly as far and as fast as they can. Hoping and flying and running, days over nights.

And then a city. A possibility of hope. Adelpha's mind was muddled the next few days.. still trying to comprehend her disastrous escape.

Finally, she wakes up, feeling much better. Light blue and purple along with a hint of pale green and gold fill her vision. And the blur speaks. 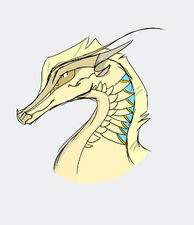 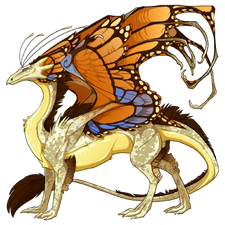 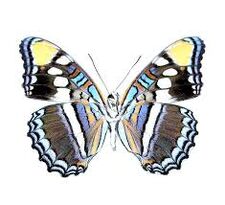 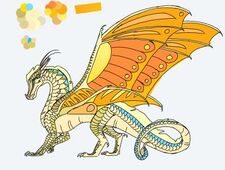 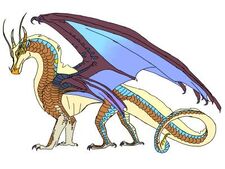 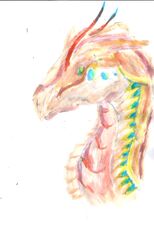 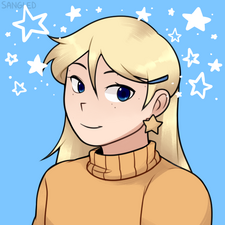 Adelpha as a human, by FSH! thanky! 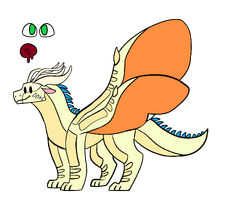 Jada by Animal!
Add a photo to this gallery

Retrieved from "https://wingsoffirefanon.fandom.com/wiki/Adelpha?oldid=2125292"
Community content is available under CC-BY-SA unless otherwise noted.