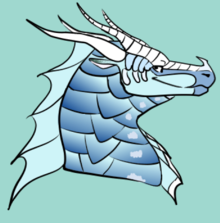 Most likely his flirtatiousness

8(Young Adult) (This can change for RP reasons)

Dancer, Being a crap

None, Open I guess?

Charming Dragons, doing what he wants

come at me bro

Actias is a handsome gradient of white and pale blue and greens. He is white, mostly, but a dark blue tips each scale, and assorted green and blue scales are around his feet, about, tailtip, and the edges of his wings and ears, lessening as they fade back into the main body, becoming lighter and lighter.Actias is a rather large dragon, and in time he could reach ‘Morrowseer’ size, though never with the bulk. Actias is very skinny-he is pure muscle, but no real bulk, due to his very quick growth. The end of his tail is missing.

Actias, in general, a very emotional dragon, and he is not above theatricals to get what he wants. Due to his size, complaints about his height are unfortunately common. He is a shameless flirt, and uses his looks to his advantage. Actias is rather open and friendly, and cares deeply about those he holds close, and is fiercely protective of them, and this is the only time you can really get to him. He brushes insults off easily and doesn’t care what you think of him until you insult his friends. He isn’t the most intelligent, but he is very observant.

Actias has a deep fear of being ignored and also being alone. This is due to his mothers being very busy and not always having time for him-he needs to be in the center of attention. He is also afraid of rejection by those he cares about. Oddly enough, he is also scared of spiders, other than tarantulas, which he finds interesting.

Actias is a flirt, and he can come across as WAY too strong and confident. He doesn’t have the right barriers in place. He is also very pushy, and it’s his way or the highway in any situation, though the correct reasoning is possible to push him over. He can be too emotional as well over any situation, and make a fuss over inconsequential things.

He is kind and compassionate to those he cares for, and very loyal. He would never promote infighting or gossip that hurt those he cares about. He is not greedy for wealth, rather wanting friends and attention.

Actias was born to a pair of SilkWings-one a teacher at a SilkWing school, and the other a simple laborer. When they wanted to have an egg, they adopted a rather large one. Most of his incubation was uneventful.

For the first three years of his life, Actias lived with his mothers happily. However, the two SilkWings, though they loved him, were busy and young, and this resulted in Actias becoming very clingy and needy all the time. He would run after a mother as she left, then chase the other. Eventually, he got fed up and ran, crying that they didn’t love him, out into the webs. By accident, he knocked over a flamesilk lantern, burning he tip of his tail off and melting the top of his band, so that it couldn’t be read. He ran all the way to the next hive over, and then decided he didn’t want to really run away. By that point, HiveWings had found him, and, being unable to read his wristband, simply dropped him off at a nearby dance studio.

Actias was brought up mostly by HiveWing and SilkWing entertainers, trained to be a dancer of all disciplines. The dragonet has no concerns about this, considering it simply a way of life. His cousin, Yutyrannus, showed up at the hives one day, looking a normal SilkWing, but with only one pair of wings. Actias took care of his younger cousin, who was about one at the time, by charming everyone into liking Yuty. He taught the dragonet how to perform like him, as Actias learned how to dance during that time period, becomking one of the best. Yuty wasn’t really interested. Unlike Actias, he was unwilling to be content with being a sort of eye candy for other dragons. Actais didn’t see the prison he was in. After three years of the two being close, Yuty abandoned him for a life on the shore, free from the HiveWings. This event hurt Actias, who struggled with the other‘s parting words to him: ‘Don’t be a slave.’ He wasn’t a slave, right?

Actias was mostly to content to dance his life away, gaining trust from the HiveWing ‘moderators‘ and allowed to do really what he pleased. This included making a sort of income, as well as establishing short-lived relations with other SilkWings, often charming them in the first night and then leaving. He didn’t feel that was a bad thing. Actias mostly hung out in bars and the such, dancing for a living, and of course, meeting said dragons. He is somewhat infamous in Jewel Hive for his dancing, and, of course, his ability to overstep any boundary you have and somehow charm his wormy way into your heart. As his colors are seen as rare, as well as his general looks are odd, many call him handsome, or beautiful. Actias didn’t tire from this life. He enjoyed it, burying his insecurities and problems in intoxicants and pretty SilkWings. Somewhat seen as odd, he was hired several times to follow HiveWings around as a pretty gem, but his generally obnoxious attitude got him fired quickly as well. Also seen as odd was his tendency to flirt with males, females, or really anything. He also tends to flirt with HiveWings, but thy generally dismiss him.

This is an odd one for Actias. He finds her...interesting at least, though he doesn’t take her seriously and eager to dismiss her thoughts. He knows about her crush on him from body language, but hasnt dedicated thought to how he feels about her. Mostly, he thinks her changing colors are pretty cool, and her optimism makes him smile.

-WIP HE WILL BE IN A FANFIC BUT IDK WHAT ABOUT-

Made by Lemonssharks on FR

Made By BlazingPheonix101 on FRIENDS

Retrieved from "https://wingsoffirefanon.fandom.com/wiki/Actias?oldid=1855209"
Community content is available under CC-BY-SA unless otherwise noted.