rainwing (with leaf and hive blood)

to destroy things, listen to the music, to sing and fly

Aconite is a male rainwing with hivewing and leafwing blood.

His principal scales are lime, a strong orange and fucsia with black dots. On his back there are red-fucsia spikes and he has orange wings inside.

His wings have got black triangles on them with a touch of red and lime. Outside his wings are exactly the opposite.

He's got venomscales and really strong rainwing powers, but he can't change his black scales.

he's also sad because he's considered a monster by the other rainwings.

And when a dragon makes he angry he likes to destroy everything with his venomscales. 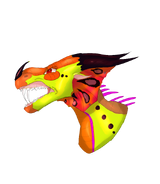 by wildloner, thx!
Add a photo to this gallery

Retrieved from "https://wingsoffirefanon.fandom.com/wiki/Aconite_(chemical_Oc_contest)?oldid=2243166"
Community content is available under CC-BY-SA unless otherwise noted.