His claws, talons and teeth

Ace is a male Silkwing painted with flames.

He is quite strong and big for his age.

Is bigger than most Silkwings

Has a noticeable presence

Holds himself tall and strong

Dragons tend to move out of his way

Almost always does things with a purpose

He is headstrong, stubborn and loyal to a fault.

He can seem cold and distant at first but if he likes you, he will warm up to you.

Has a few close friends.

Quite isolated from everyone but the few he lets close.

Can be intimidating and scary.

Likes the burn of pushing his body to the limit.

Is a hard worker

Can be thoughtful but can also be thoughtless and callous

Finds most other Silkwings pathetic for being 'sniveling peace loving worms'

He hates how the Silkwings bowed down to Queen Wasp during her reign.

Disconnects from the world sometimes

Fiery temper which can lead to fights and impulsivness

Doesn't feel romantic love but he does feel friendship love.

Would pick dare over truth.

When Ace was in school, the teachers assumed he was a bully, due to his size and aggressive manner. In a way he was a bully, but he was too young to know better. He got other dragons to do things for him, like homework. He threatened them and beat them up. To this day he's still not sure why he lashed out at others like that and her regrets it.

As he grew older, he became even more isolated and his temper grew volatile. When asking or telling him something, dragons would be careful cause they never knew what side of him they'd get. He fought a lot, trying to solve problems or disagreements with violence. His reputation grew as a violant fighter who never loses.

In his last year of school, a couple of new Silkwings dared to get close to him. They sort of adopted him into their friend group. He lashed out at them often and tried to get them to leave him alone but they were just as stubborn as he was. After a while of putting up with them he slowly grew to like them. They became close after a while.

Got into fights a lot and has turned out to be a good fighter because of it.

Isn't close to his family

Has a sister but she's a lot younger than him

- originally was going to have 4 siblings, based on the suits in a deck of cards

-name is based of a deck of cards

-originally had a black and dark blue/green color scheme but red suited him better.  silkwings can't be black as well so...

- the fact that his sexuality is ace is a coincidence. please no jokes on this 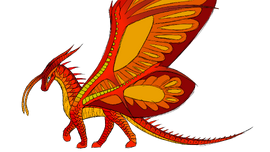 By StarWolfQueen
Add a photo to this gallery
Retrieved from "https://wingsoffirefanon.fandom.com/wiki/Ace_(QueenPeril)?oldid=2428471"
Community content is available under CC-BY-SA unless otherwise noted.