To become a famous artist

Parsley is a cheerful RainWing artist who loves to relax and socialise. He is TheRavenclawNerd's antisona, therefore he is almost polar opposite of Grace (but he's not the exact opposite of me :3)

Parsley is a brightly coloured young dragon, he is obviously a hybrid. His eyes are a bright acid green that almost seem to glow, differing from a RainWing's leaf green eyes or an IceWing's dark blue. His build is that of a plump RainWing, though he does have an IceWing's whip-thin tail.

His wing membrane is usually a soft yellow, his wings are a bright lemon yellow. His wing-claws are long and serrated, just like an IceWing's. He also has IceWing spines that form a 'crown' around his head before trailing down his back. These spines are pure, spotless white, they contrast nicely with his bright scales.

Parsley's horns are dark, ashy grey, no one knows why exactly they are this colour, they just are, his horns are also sharp and straight. His ears are slightly large and prominent, featuring a small nick at the top.

He has RainWing spots going down the sides of his neck, which are an identical colour to his wing membrane. The spots going down his legs are strangely light green, like the bands of scales around his wrists and ankles. He is unable to change the colour of these scales. His claws are just as white as his spines.

His main body scales are bright yellow, but they lack the shimmering quality that IceWings and RainWings can share. Parsley is absolutely terrible at hiding his emotion, but why would he want to? He has nothing to hide and doesn't care if his whole tribe knows how he feels. His underscales are light yellow, like his wing membrane and spots. He is unable to turn invisible thanks to his IceWing genetics, but he doesn't really care about that either, he doesn't have much purpose for stealth.

Parsley wears a bag made of woven grass around his right hind ankle, this contains a small assortment of items, including tranquilizer darts, a paintbrush and a small tub of paint.

Parsley is a happy soul. He is quite the stereotypical RainWing, he's peaceful, cheery and colourful, but he is anything lazy. He is one of the most hardworking dragons in his village, he sometimes stays up late doing whatever project he decided to begin. He is especially creative and arty, he LOVES to paint. It is not a rare sight to see this dragon with paint smeared on his scales and on his talons, he is definitely not afraid to get a bit messy.

He is about as loyal as you can get. Once you become his friend, he will do anything for you. While he may be a little naive or may do things wrong, he always means well. Parsley is one of the most social RainWings you could find, he will chat to anyone and everyone. Bubbly young dragonet? Sure! Grumpy old NightWing? Definitely! Shifty prisoner? Absolutely! His tendency to talk means he has spoken to many many other dragons, and most of them have liked him. In fact it is rather difficult for others to dislike him.

While he is fun and loving, Parsley really isn't the brightest of dragons. He can barely read or write, leading to him becoming fed up when looking at words. He is very open and a bit too trusting, so he can be tricked fairly easily. Sometimes he has spontaneous outbursts of improvisation, and really doesn't know what's coming out of his mouth... or going on in his head.

He is definitely non-violent and wouldn't hurt a fly, but every now and then he becomes fascinated with what would happen if he injected his Frost-Venom in anothier dragon's bloodstream. He, of course, would NEVER do this even in a life threatening situation, but the thought does cross his mind at random times and he can't stop it.

Parsley was born two years after Glory became queen, and therefore was raised by his father, Berry. His mother was a highly ranked IceWing, named Hype, who left the Ice Kingdom when Queen Glacier died. Hype soon discovered she hated the Rainforest; along with the RainWings, NightWings and sloths that inhabited it. She decided to escape the Forest, leaving Berry and her un-hatched egg.

Even without a mother, Parsley had a happy and normal upbringing. No one bullied him for being a hybrid (they'd heard the story of a bullied RainWing hybrid killing the dragon bullying her, besides, who'd bully such a precious bean?). Education was still an uncommon thing for RainWings, the NightWing schools shunned RainWings, the first RainWing school was still being developed, and getting a tutor was extremely expensive, so Parsley was home schooled by Berry. Berry wasn't educated himself, so it was quite difficult to even teach Parsley basic reading skills.

At age four, Parsley was almost sent to Jade Mountain Academy for a better education. In the end, he didn't get a spot, but he didn't care, he was practising his new found skill at art.

When he turned six, he got a part time job as a shop assistant. Through this job, Parsley developed a basic understanding of math. Using his pay, he was able to buy himself every item necessary for art, he even got himself high quality paint so he wouldn't have to mash up fruits and use juice to paint. He began selling artworks and soon an art gallery noticed his art, and offered a large amount of money for it and a generous wage for him to work for them. Surprisingly, he refused, saying he paints for fun and leisure, not for a career. He still got an incredibly large pay for selling the gallery some art, and used that to buy the materials needed to build an art studio.

Parsley became renown for his paintings. He began offering free art lessons to RainWing and NightWing dragonets. He continued to sell his most paintings, and now is broadening his art to pottery and sketching.

Iceberry is Parsley' fellow Hufflepuff! They are good friends, as they are both usually optimistic cheerful dragons. They are even both IceWing/RainWings!

They may seem like opposites, but Parsley and Andrena are suprisingly great friends! Something about Andrena's feirce fighter spirit fits in well with Parsley's laid back loving personality. He admires this HiveWing's intelligence.

Parsley was quite scared of Frosty when he first met her, but soon found out that she was just misunderstood. He enjoys hanging out with this IceWing/SkyWing, even though she is quite different from him. He can see past her mood  swings and see how empathetic and nice she is. 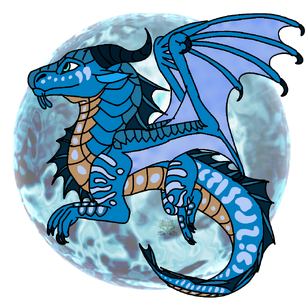 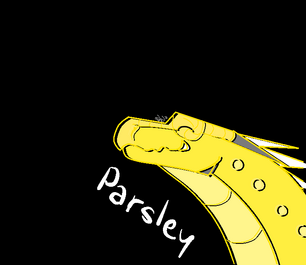 By ForestFire! Tysm he looks great! 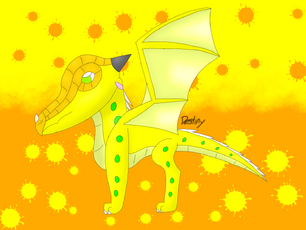 By Puppylurvr! Ty he looks adorable! Parsley made on FR by Sby! Tysm! 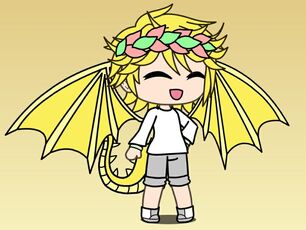 Parsley made by MKDragonet on gacha life 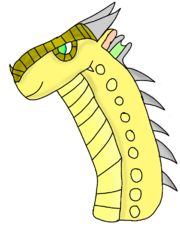 New and improved Parsley art by the amazing BanderItchy!
Add a photo to this gallery
Retrieved from "https://wingsoffirefanon.fandom.com/wiki/-Parsley-?oldid=2041235"
Community content is available under CC-BY-SA unless otherwise noted.