Helios gives off an aura that he’s not a dragon to mess with. Even if you were a SandWing, you’d likely tremble under his gaze, and feel a rush of fear just looking at him. He’s tall, taller than both his siblings, with four long limbs and a powerful body. He holds his wings and head high, making him look even taller than he actually is. He’s also ripped, with huge muscles on all four limbs, as well as his tail. He has sturdy, ridged posture and a sharp jawline. His barb is in perfect condition. His wingspan is large as well, and it all fits together to make him an intimidating, imposing figure.

He has soft colours as contrast to his hard features. Buttery, plain yellow mainscales. Sandy-coloured underscores and underwings. His frill is the soft colour of a bar of milk chocolate, but just a couple shades lighter. His horns are a dull golden colour, as well as his barb, sharp and prominent at the tip of his tail. Soft, pale scales that really don't fit who he is, and dark emerald eyes.

His wing membranes are decorated by what looks like a sun drawn with a marker. This is a marking of his family, both his parents and both his siblings all having similar markings. It also doubles as their gang symbol.

Helios's soft scales are dulled in certain by dry blood from his scars. He has a scar on his cheek, from a battle with a NightWing from which he emerged victorious. There's a wide scar on his underbelly that constantly rips open when he's fighting tough opponents. Finally, there's a scar on one of his forelegs, whose origin he refuses to admit.

Although most of the things they loot go to the actual leader of the gang, Helios does have a few pieces of jewelry she allowed him to wear. The first is an anklet around the same leg as his scar. The other is a golden chain necklace, which he stole from a dragon he killed.

I suggest you leave my sister the hell alone

You can take it from here, sis

You actually wanna fight me?

Stop being such snails! 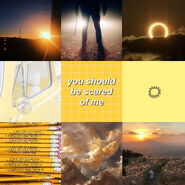 tundra
Add a photo to this gallery
Retrieved from "https://wingsoffirefanon.fandom.com/wiki/-Helios-?oldid=2317939"
Community content is available under CC-BY-SA unless otherwise noted.